Attenuators are passive two-port devices that reduce or attenuate the high level output of a signal generator. They are often used to provide a lower level signal to an antenna input of a sensitive radio receiver or similar device. Attenuator accuracy and overall effect on a system is also important to know particularly in applications for test equipment or other sensitive electronics.

Improving Frequency Response
The IMS A-0402WA attenuator has been characterized up to 40GHz. When this component is mounted upside down with the resistor and the transmission line in the same plane, improvements can be gained which reduces losses and minimizes capacitance effects. Face down mounting has several other advantages such as reduced current loop area, lower ESL, improved power handling and reduced overall insertion loss. Figures 1 and 2 demonstrate the improvement of physical mounting geometry with respect to insertion loss. 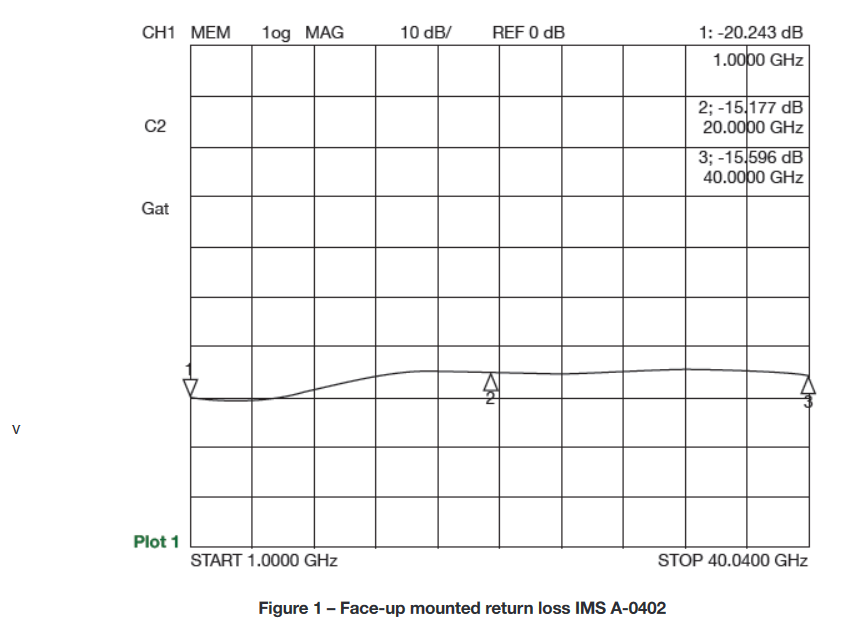 As seen in the plots above, the two mounting techniques provide the same level of response up to about 8 GHz, at which point the ‘face down’ attenuator begins to outperform the face up attenuator. The improvement becomes more dramatic as the frequency increases.

Improvement through controlled device impedance
For greater improvement to the performance, the control port of the attenuator should provide a proper 50-ohm impedance match and be as close to the 50-ohm value as possible.

The following discusses how this improved IMS2647 and IMS2652 can translate to performance in electronics applications:

The below examples will show the attenuation error % which truly depends on the absolute value of the attenuator. These examples are 2 very common values of attenuators the 3dB and 1dB.

For the highest level of precision, reliability and repeatable performance of attenuation for high-frequency applications, the A-0402 is a good choice. For the next generation RF applications requiring even higher accuracy and simple “drop-in” convenience of upside-down packaging, IMS recommends the IMS2647 and IMS2652 to optimize the performance in these demanding designs.

Take a look at our whitepaper to read more about the high performance of IMS’ A-Series.